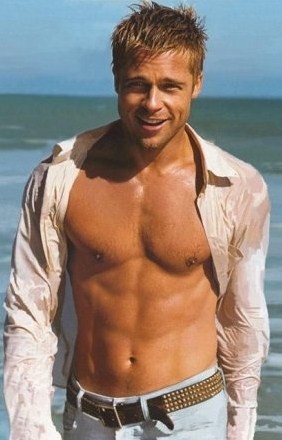 We can’t wait to see Brad Pitt in his new film “Cogan’s Trade”. In the film Brad (who plays Jack Cogan) investigates a heist which takes place within a casino during a poker game. However, apparently there are going to be plenty of near naked scenes which Brad Pitt shows off his still stunning body!

There are plenty of new hunks in Hollywood at the moment but we wanted to take a moment to remind ourselves of the hot and sexy Brad Pitt! Plenty of photos and videos out there show his penis bulging in his shorts – we love it! We wish Brad the best of luck in his new film and encourage him to take off his shirt and put that sexy body on show whenever possible!

Pitt’s acting career has gone from strenght to strength over recent years. He has now received two Academy Award nominations and and impressive 4 Golden Globe nominations (he won 1 of these).

However, what we think is most impressive is that he still must be the hottest guy in Hollywood! Brad still gets plenty of media attention in newspapers, magazines, the internet and TV. We think he 100% deserves it!!